I thought I’d write about how grown up I feel interning in New York this summer… but that’s not really true.

More honestly, I’m playing dress up. I hardly recognize myself in the mornings, in an ironed button up and pencil skirt. Then I see the goofy photo on my employee ID—the one where I was about to say, “What?” and my bangs are too long—and I feel like a kid again.

Surprisingly, I’ve never worked full time outside the school year. Even after college began, I’ve spent summers making ice cream and hoping for a tan. While my schedule this semester might be less open, I do love living in New York. For a long time I wanted to go to school here. And though I ultimately ended up in Boston, I always wondered if I might secretly be a New Yorker.

It takes more than a summer to become one, but I’m slowly getting used to the subway, the pace of the city, the feel of different neighborhoods. I’m learning to walk with purpose, and crossing restaurants off my list. And I’ve got a beautiful apartment I’ll be heartbroken to leave after August.

The kitchen is the first room off the apartment’s long hallway, and the first room I come home to. If you’ve ever lived in this city, it won’t surprise you that it’s the size of a shoe box. It’s narrow and dishwasher-less, with a fold-up table and two chairs an arm’s reach from the fridge. There’s outlet space to plug in either the microwave or electric kettle—only one—and the oven runs so hot you can burn yourself without opening it.

But the cabinets are stocked all the way back with spices, herbs, sugars and extracts, five flavors of instant macaroni and lots of tea. There’s a small window that looks out onto absolutely nothing but lets in a gauzy pool of light. And even though I wasn’t impressed upon first glance, this kitchen has grown on me.

I didn’t expect to use it much. But when I found myself wanting to bake, I did.

I wanted something quick, inexpensive, and delicious. So I made rice krispies, a no-bake recipe that only took twenty minutes from start to finish. The recipe is as easy as melting butter and marshmallows, stirring it into the krispies, and pressing the whole mess into a pan. For fun, I added chocolate chips and graham crackers, since nothing says summer like s’mores.

Simple as they are, there’s something thoroughly satisfying about these little squares. I’ve always liked rice krispies—gooey, soft, and crunchy all at once, with a sweetness that sticks to the back of your teeth. These ones feel especially nostalgic. The chocolate chips melt a little, thanks to the residual heat of the marshmallows. The shards of graham cracker lend a wholesome crunch. The whole thing sticks stubbornly to your fingers, and it’s great.

It might be my first summer away from home, living with my first long term boyfriend in my first New York apartment, working 40 hours a week at a company with 30 other interns. But one bite of these rice krispies and I feel like a little kid again, like it might be another summer spent in the sun.

I hope I never get too old to chase that feeling. 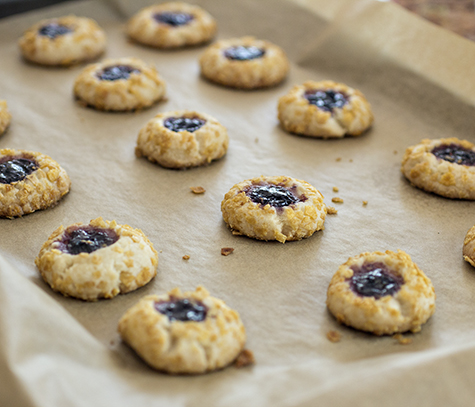 I just finished my junior year of college. Which seems impossible, and exciting. I’ve signed the paperwork on my first two apartments—one in New York, where I’m interning this summer, and another in Cambridge for my senior year. On top of everything else, I’m finally 21. But for some reason I can’t stop thinking about 17.

I haven’t posted in a long time. I didn’t forget or stop trying to. But my life has gone through a lot of changes in the last four years. I moved to the opposite coast, took classes, interned, worked, met new people, studied abroad, and lived on my own for the first time. I was in college and there was so much to do! So much to figure out about myself! And there were so many reasons why I wasn’t blogging.

Occasionally I tried to bake, but it felt like going through the motions. I couldn’t explain why it no longer made me happy, it just didn’t, even before my blogging hiatus began. The last thing I wanted was for 17 and Baking to feel like homework, so I didn’t force it. I wanted to want to write. I just didn’t expect it to take this long. 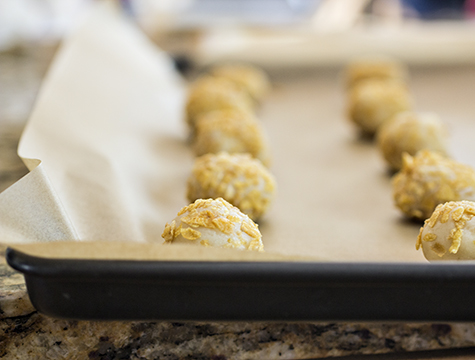 For months, I could explain to everyone—especially myself—why I “couldn’t” blog. My freshman year dorm didn’t have an oven, ingredients were expensive, I didn’t have the free time I did in high school. But my explanations were starting to sound like excuses. For what, I wasn’t sure.

I began noticing I felt unmotivated about other things too. I’d stopped taking out my camera, even though I loved photography. I kept writing for classes, but the joy and creativity had noticeably packed up and gone a long time ago. I didn’t feel like hanging out with friends or going out on the weekends. I didn’t want to waitress. I just wanted to cozy up at home and watch TV.

At first I thought feeling like this was a natural part of growing up. In addition to all the changes in my life, I stressed about my career, my future, and my “potential,” which I worried wasn’t turning into “reality” fast enough. I convinced myself I no longer enjoyed baking to avoid facing a much more unpleasant truth—that I didn’t really enjoy anything anymore.

I didn’t feel sad exactly, but I felt empty a lot of the time, and for no real reason. Boredom and anxiety pushed out positivity and ambition. Sometimes I realized I didn’t even know why I was upset. The bewilderment and frustration was just as bad as the unhappiness itself. I felt like I was living in my own empty exoskeleton. 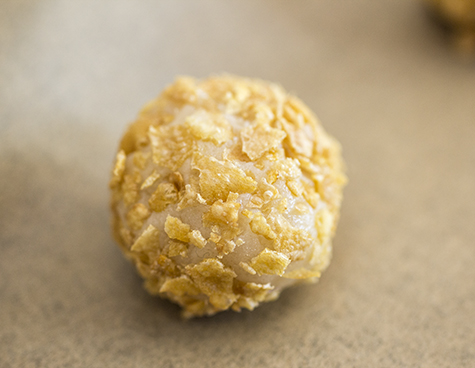 Depression is terrifying. There’s no denying that. But I’m learning it touches a lot of people and is nothing to be embarrassed about. It’s also not necessarily a life sentence. Though I can’t explain why, I’ve been feeling better these days. The fog is still there, but I can see beyond it, and I’m excited by the hazy future I can make out.

A few weeks ago, I felt like baking, so I made these blueberry thumbprint cookies. There isn’t a cute memory or anecdote to recall. I couldn’t even tell you why I rolled them in cornflakes (for texture? I don’t know. I didn’t question it.) But I did feel a little better, watching them cool on the counter. I didn’t get my hopes up, but I smiled a little when none of the cookies made it to Day 2.

And today, I found the motivation to publish this post, which I’ve been writing in my head and second-guessing for months. I’m not going to question that either, just keep looking forward. 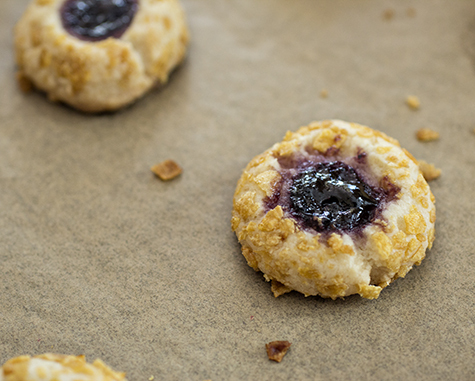 I don’t know if it was a mistake to let the blogging slow down for so long. Ultimately, I try not to blame myself. I’ve realized it wasn’t something I could just chin up and power through. But it is something I can start again, if I want.

I don’t feel 17 anymore and I won’t pretend to. But that doesn’t mean I’ve outgrown 17 and Baking. Instead, I’d like to think it can grow with me. There are so many things I have yet to do, places to visit, people to meet. There are more wonderful things to look forward to than ever before. I’m going to start with 21.